of dreams and disappointments

I recently read a book that I mostly love, a LOT, but also hate just a little bit. Well, it’s not so much that I hate it – it’s that I’m angry at it.

I thought I knew how the book would end. It didn’t end that way, and I was sad and disappointed and, at first, so angry because I just didn’t want to accept the discrepancy between what I had really wanted to happen and what really did. Between my dreams for the book and its reality.

That’s happened to all of us, right? In our real, nonfiction lives? We’ve been disappointed by – and perhaps angry at – the discrepancy between our dreams and our reality?

I’ve been talking (well, texting, really…one of the pros and cons of 21st century relationships) with a friend over the past several months. She’s been struggling with her hopes for her artistic career and the financial realities, with her dreams of starting a nonprofit and feelings of inadequacy and insecurity, with her ambition and talent but somewhat limited opportunities.

She’s struggling with the discrepancy between her dreams and her reality.

I have another friend who is struggling with her marriage. It’s taken some turns and is not what she thought it would to be. She’s not a newbie discovering this a month in, after dating for just a few weeks, but a seasoned wife. Still, it’s not what she expected.

She’s struggling with the discrepancy between her dream and her reality.

I’ve been there. Hoping for one thing, and getting another. We all have.

In fact, I’ve been there often. And I could easily – easily – come up with a dozen examples, in a dozen different categories. Viola. Writing. Marriage. The timing of my kids. My old job. My current job. Probably my new job.

I can’t understand my life. I can’t explain to my friend why her career is taking the turns that it is, or promise her that her nonprofit will get off the ground. I can’t promise my other friend that her marriage will heal and become what she had thought it would to be.

Shoot, I can’t even fully understand the characters in this book that I love.

I also still love my God – even though I don’t understand Him, either. But I do think He’s there, working in those discrepancies between our dreams and our realities.

I’ve been listening to this song a lot lately. Here’s the first verse and chorus:

I’ve made you promises a thousand times

I’ve tried to hear from heaven,

But I talked the whole time.

I think I made you too small.

I never feared you at all, no.

If you touched my face, would I know you?

Looked into my eyes, could I behold you?

What do I know of you, who spoke me into motion?

Where have I even stood, but the shore along your ocean?

Are you fire, are you fury? Are you sacred, are you beautiful?

So what do I know?

What do I know of holy?

I think I made you too small.

How often have I done that? Made God smaller than He is, believed that He’s only capable of a limited amount? How often have I shaken my angry finger back at God and thought, I don’t understand — AT ALL — what you are doing! There’s no way you’re here, present in my life. I can’t believe in you!

You can’t be bigger than my own small mind, God.

So often in weak moments, I’ve believed that there should never be any discrepancy between our dreams and our realities.

But then — where would God be? If we knew all the answers? The way the book would end? If we could understand every character and every person and every circumstance?

He’s working in those spaces. He is somehow shining through and creating something better than even our best dreams.

Have you seen Him working there? What do you know of holy?

Oh – and that book? I do recommend it, with caution. All the Bright Places. 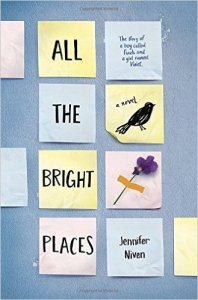 3 responses to “of dreams and disappointments”

Something to say? Cancel reply